The Global Pact for Environment Conference, Dakar, Senegal, May 4, 2018 THE RIGHT INNOVATION AT THE RIGHT TIME

A LAW FOR FINTECH COMPANIES WITHIN THE CEMAC ZONE: THE RIGHT INNOVATION AT THE RIGHT TIME

“Leading for impact”, the theme retained for one of the world’s greatest rendezvous; The Global Shapes Annual Summit organized by the World Economic Forum.

The summit held in Geneva-Switzerland from Augus... Driving change in Africa through the Blockchain Technology

The 4th edition of UP EVENT on How to revolutionize Africa through blockchain?, held on July 10, 2019 at the headquarters of Bpifrance in Paris ... During the LEX Africa Conference in Dar Es Salaam, Tanzania, in March 2019, our Managing Partner Danielle MOUKOURI DJENGUE, as a speaker shared on D...

With LegalTech, practice will never be the same again - From the 2nd-4th August 2019, was held in Minneapolis-St. Paul, USA, the 42nd Climate Reality Leadership Corps Training hosted by former US Vice President AI Gore, founder and chairman of the Climate Reality Project. 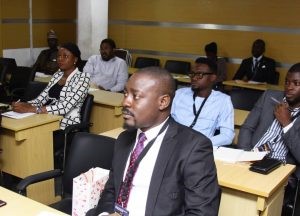 African Lawyers were satisfactorily trained on Blockchain and related issues at the BLOCKCHAIN FOR LAWYE... REPORT ON “THE OHADA PROFESSIONAL DAYS 2013”, a Seminar co-organized by D. MOUKOURI & Partners Law firm and the Federation of OHADA Clubs in Cameroon with the participation of The Cameroon Bar Association

Douala, October 21- 23, 2013 Under the patronage of the OHADA Permanent Secretariat

From the 21st to the 23rd of October 2013, The OHADA Professionals Days 2013 were held in the Conference room of the D. MOUKOURI & PARTNERS Law Firm in Douala (Cameroon), under the general topic: “The Practice of Debt Recovery within the OHADA Zone”.

Co-organized by D. MOUKOURI & Partners law firm and the Cameroon OHADA Federation, The OHADA Professionals Days 2013 brought together Lawyers from the Democratic Republic of Congo, Gabon, Benin, and Cameroon as well as company secretaries from Banks and other prestigious companies in Central Africa.

This exchange and participative meeting between professionals of the OHADA Zone aimed not only at endowing the participants with the practical and necessary tools for optimum debt recovery but was also and most especially the best way to celebrate the first anniversary of the adhesion of the Democratic Republic of Congo to OHADA.

This seminar started on Monday the 21st of October 2013 at 10:15 a.m with the opening speech of Barrister Danielle MOUKOURI, member of the Cameroon Bar Association and Managing Partner of the D. MOUKOURI & Partners Law Firm, who started by thanking the participants for attending the event, The Permanent Secretary of OHADA represented and the Representative of the President of the Cameroon Bar. It is in this light that she underlined the importance of this exchange platform in the reinforcement of professionals’ capacities within the OHADA zone.

Further to this opening speech, Mr. Alexis NDZUENKEU, Representative of the OHADA Permanent Secretary, praised the great mobilization of Lawyers and Company secretaries in attendance, which confirmed the interest thereby expressed to one of the most important Uniform Acts of OHADA. His speech equally enlightened on the ten (10) years walk that led to the adhesion of the Democratic Republic of Congo to OHADA.

The Program continued with a speech from Barrister TCHAKOUTE PATIE Charles, Representative of the President of the Cameroon Bar, who congratulated and encouraged Barrister Danielle MOUKOURI for such an initiative strongly supported by the Cameroon Bar.

The presentations of experts, the legal drafting studied and the relevant discussions on:

enabled to meet the announced objectives and led to the conclusion that despite its “simplified” appearance, debt recovery within the OHADA system presents some challenges that one should assess methodically.

This 3 days training session was concluded with the handing of an Attestations of participation and the distribution of the OHADA 20th Anniversary gadgets. Evaluation of the meeting by the attendees and the special thanks of the organizing committee were full of emotion. The participants found no difficulty in expressing their satisfaction and willingness to take part to subsequent editions. This seminar ended on the 23th of October 2013 at 6pm with a series of photos and a farewell cocktail.